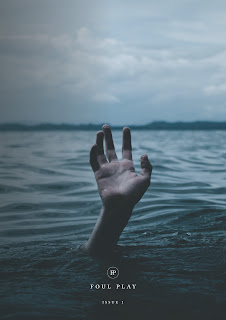 "Our audience is definitely more female than male, but having an interest in true crime is something lots of women still won’t admit to, as it’s not a particularly stereotypically feminine interest, and I think some women worry they’ll be judged negatively for wanting to read about murderers. I think it’s also unusual for a magazine to be started and led by two women, so I feel like we’re breaking through a few walls here."

Why our preference for print is misleading

But as Dr Joe Webb reminds us, preference surveys "track the way people believe they used to do things, not new behavior, nor does it indicate future behavior."

This quote comes in a longer piece that ties together the cost of using the US Postal Service with Mary Meeker's annual survey of media, technology, the economy and more. Dr Webb was prompted to write it because the president of the Magazine Publishers of America (MPA, the US equivalent of the UK's PPA) called into question Meeker's motivation and impartiality.

It's a longish read with a specific US worth looking at for the more universal points he makes. Like this further thought on preference surveys, for example:

They do not track frequency, or volume of usage. And when studies report things like “70% still prefer medium A,” that conveniently forgets that until medium B came around, medium A was 100%, and that it was the only choice. Being at 70% is actually loss of almost one-third of the hearts and minds of , not a reason for celebration. By presenting it that way, the survey makes a particular condition seem better than it is.
Sadly, preference surveys encourage producers of medium A to stick with that medium at a time when they should be using the surveys to show the urgency of being involved in medium B, or better yet, figure out how mediums C and D will affect B and A. Preference surveys say something nice and make the entrenched class readers feel good, but the surveys are not really strategic, tactical, or actionable, and give competitors more time and freedom to encroach on their business.

Many magazine publishers are looking at B, C and D, of course, but nostalgia for print – perhaps bolstered by an apparently thriving print-based indie magazine sector – continues to skew the view from some perspectives.

I love print – but most of my reading is done on a screen.

Major hat-tip to Bo Sacks and his wonderful newsletter.

A classic of magazine craft on screen

Paper magazine's collaboration with Posture is a classic of magazine craft. It comes in digital draws on very traditional tropes and techniques 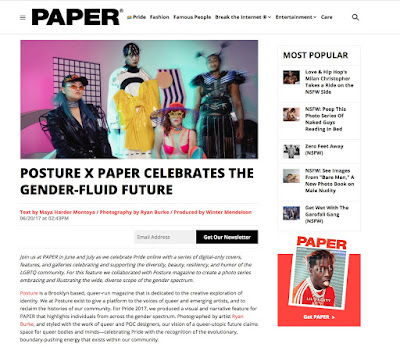 1) It combines great photography with pithy copy in the form of first person interviews;

2) The interviews are short but revealing and thought provoking (and either the interviewees are very articulate or there has been some first class subbing);

3) The topic is niche, in the sense that it concerns a subculture (or set of subcultures), but socially important. That importance is likely to increase, not least at the influential margins of politics: as the New Yorker's -comic explanation of the recent UK general election result (written in the ever-popular quasi-biblical style) noted

And the young people said, Jeremy shall bring peace unto all nations, for he hateth the engines of war that take wing across the heavens. And he showeth respect for all peoples, even unto the transgender community.
And the elders said, The what?


4) The reader comes away having learned something and with plenty of material for contemplation and self-reflection;

5) It makes a whole series of serious points without preaching.

This is the feature (23 photographs): http://www.papermag.com/peep-these-portraits-celebrating-the-gender-fluid-future-from-posture--2445073701.html?slide=1

This is Paper's introduction: http://www.papermag.com/peep-these-portraits-celebrating-the-gender-fluid-future-from-posture--2445073701.html

Magazines, solitude and the appreciation of craft

If you have a few minutes to spare – well, plenty of minutes actually – this piece by Andrew Sullivan is an excellent read.

His theme is how smartphones rob us of the space to appreciate silence and practise contemplation but along the way he also observes:


The writer Matthew Crawford has examined how automation and online living have sharply eroded the number of people physically making things, using their own hands and eyes and bodies to craft, say, a wooden chair or a piece of clothing or, in one of Crawford’s more engrossing case studies, a pipe organ. We became who we are as a species by mastering tools, making them a living, evolving extension of our whole bodies and minds. What first seems tedious and repetitive develops into a skill — and a skill is what gives us humans self-esteem and mutual respect.


This made me think of why magazines like Ernest Journal 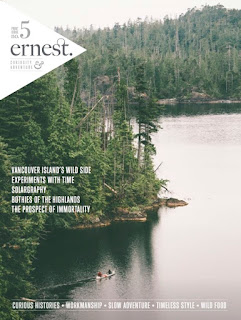 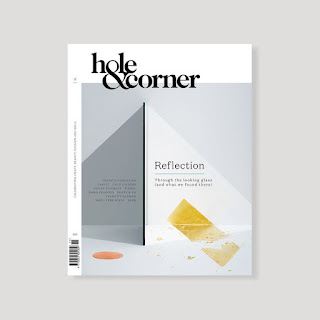 achieve the appreciation and success they do. Their raison d'être is to celebrate the craft of making a chair or a piece of clothing or a pipe organ, or to show us places we can go where mobile signals do not reach.

Sullivan's piece itself is published in a magazine – New York – and it is not pushing things too far to say that the craft involved in creating and publishing a magazine can itself provide the space for silent contemplation, as well as the haptic pleasure of holding and feeling the printed artefact.

When you have the minutes – and they will repay you – here is the link: http://nymag.com/selectall/2016/09/andrew-sullivan-technology-almost-killed-me.html

Marcus Morris founded The Eagle comic, still remembered for Dan Dare and cutaway illustrations of exciting mechanical artefacts like racing cars and jet aircraft. He followed this with Girl, Robin and Swift; he became the managing director of the National Magazine company, introducing Cosmopolitan to the UK; the British magazine industry's most prestigious annual award is named in his honour – and Cardiff University has his personal archive!

I have worked at the university for 20-odd years and I had no idea this material was in our collections until last night, at the launch of the Tom Hopkinson Centre for Media History when head of the Special Collections & Archive section Alan Vaughan-Hughes revealed the riches available to researchers in the field of popular journalism.

Apart from Morris – a treasure trove for researchers and scholars in the field of Magazine Studies – Cardiff holds the archives of:

• Hugh Cudlipp – editor of the Mirror, chairman of IPC (one of the most significant magazine publishing houses in the UK)
• Joan Reeder – the first full time royal correspondent for a national newspaper
• Trevor Philpott – the Picture Post journalist-turned-broadcaster and onlie begetter of The Philpott File
• Keith Waterhouse – journalist, author, playwright, champagne drinker; this material is already being researched by Cardiff Magazine MA graduate and freelance journalist Will Ham Bevan for his PhD
• Richard Stott – editor of the Daily Mirror who stood up to Robert Maxwell

It is also a great opportunity to push Magazine Studies further onto the research and scholarship radar, as launch guest and distinguished visiting fellow Professor John Hartley noted. Citing his own connection with the Welsh radical magazine Rebecca

In the 1970s and early 1980s Rebecca took the form of “a radical magazine for Wales” and gained a reputation as an investigative, campaigning title.
The magazine — and its uncompromising Corruption Supplement — documented the decay of Labour politics in south Wales and helped to bring about a long series of corruption trials which resulted in many politicians and businessmen going to prison.
Rebecca was also in the forefront of UK investigations into the relationship between the Labour Prime Minister James Callaghan and the Welsh multi-millionaire banker, Sir Julian Hodge.
Many Rebecca articles were reflected in coverage in newspapers like the Sunday Times and in television programmes including Man Alive, This Week and Nationwide. (Source)


and the historic example of The Clarion,

This cover illustration was drawn by Walter Crane, an associate of William Morris

Professor Hartley noted that social movements often brought with them their own kinds of journalism and studying the archive reveals many different types of journalism and different ways of producing and supporting journalism. The Clarion certainly had a widespread influence on many areas of social life – the National Clarion Cycling Club (motto: Fellowship through cycling) is still very active, as is the People's Theatre in Newcastle. In an age when live events and brand extensions are becoming increasingly important sources of revenue, looking back to a time when they had a social and political purpose gives us a fresh perspective.

Other guests at the launch were Amanda Hopkinson, Sir Tom's daughter and a distinguished scholar in her own right, and Magnum photographer David Hurn.

Dr Glenn Jordan, director of the Butetown History & Arts Centre, was in the audience for the launch. Glenn's book Down The Bay

re-used Bert Hardy's photographs from Picture Post in a new context. I used it as the basis of a feature exercise for students on the PgDip (now MA) in Magazine Journalism for many years – it was a great way of introducing very nice middle class students to the past and present of a genuinely multicultural working class area of Cardiff and a lesson in how to use photographs creatively but for a purpose.

There are so many competing ideas about what is happening in the political sphere and how the media are, or aren't, dealing with it that it's all too easy to become confused.

Here, for your convenience, is a selection of 14 themes. The examples have not been picked on any rational basis and I do not claim they are the only or best of their type. Nor is this list comprehensive – it's just a starting point. They all refer to the American election but can be taken to represent Brexit too.

Which of these ideas matter? Which will endure? What can we do about any of them?

6) It was rural vs urban
http://www.cracked.com/blog/6-reasons-trumps-rise-that-no-one-talks-about/

7) It was a search for respect
http://www.theatlantic.com/business/archive/2016/11/donald-trump-voter-respect/507350/?utm_source=atlfb

9) It was Fake News ...
https://www.theguardian.com/commentisfree/2016/nov/14/fake-news-donald-trump-election-alt-right-social-media-tech-companies

11) It was neoliberalism
https://www.theguardian.com/commentisfree/2016/nov/14/neoliberalsim-donald-trump-george-monbiot

13) It was the pollsters (... or the shy voters)
https://www.theguardian.com/commentisfree/2016/nov/15/pollsters-fail-predict-trump-victory-fbi-clinton

14) It's all OUR fault
http://www.huffingtonpost.com/entry/bernie-sanders-could-replace-president-trump-with-little_us_5829f25fe4b02b1f5257a6b7

In Roy Greenslade's piece about the closure of 24, the "national newspaper for the north", after just five weeks, one of the reasons for failure he suggests is "although more professional in its appearance than The New Day and with more up-to-date news, it still looked more like a magazine than a newspaper." He then remarks on the continuing success of The New European, a print publication launched to capture the interest of the 48% of the UK population who wanted to remain in the EU. 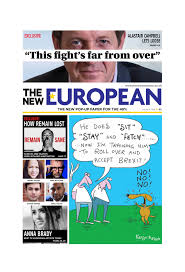 This is yet another example of how newspaper people *still* don't get what is different about magazines. Neither 24 nor The New Day were like magazines – they were the opposite of magazines. Just because a newspaper journalist thinks they "look" like magazines and the fact they were full of gossamer-thin stories about nothing in particular does not make them remotely like magazines.

Magazines are aimed at a very specific readership, which is why The New European is much more magazine-like. It shares this essential characteristic with successful magazines like The Economist (which calls itself a newspaper) and Weapons of Reason. 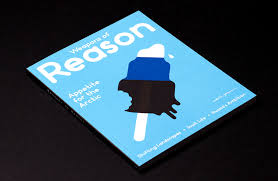 Magazines are about something, and whether that something is "A project to understand the interconnected challenges shaping our world" (Weapons of Reason) or real life stories and competitions (Take A Break), they have to offer value to a specific audience.